Signin with Facebook
Posted on March 9, 2017 by Steven Rovito 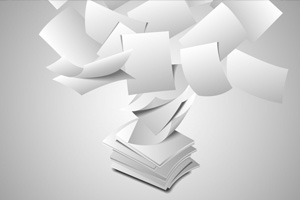 Paper makes me anxious. One of the worst feelings is coming into the office and seeing a stack of unsorted papers on your desk that is so dense you’re not sure where to put your morning Joe. Multiply that by the amount of employees that most businesses’ have, and you have a forest’s worth of a paper inside an already cramped office building. Between the printing, the copying, and the hand-outs, it may seem like there’s no end to the rush of papers endlessly making their home on your desk.

Some businesses have begun to wise up to this abundance of paper, and have begun to implement new technologies to help alleviate some of the burden. Mobile forms, a form that is translated into an app that can be used on a smartphone, work by allowing the user manipulate forms digitally instead of having the paper in front of them.

To a lot, it’s a no-brainer. But the next question that usually comes up is also the same question that stops them from making their own app – the cost.

Back in the day when apps were first starting to knock on the business world’s door, they were really expensive. Not only was it difficult to find a team of programmers and coders to make the app, the chances that they would be available in the following months if something were to go wrong were slim to none. Small-time companies definitely could not afford to hire developers full-time, and it created a massive divide between who needed the apps, and who could actually get the apps.

Today, Snappii tells a different story. With our online platform made specifically so that you, the user, could create the app yourself, there’s no limit to the amount of efficiency and usability you can find within an app. The most basic of apps are forms, and Snappii prides themselves on their version of an online form editor, otherwise known as Express Form. Try it out today to see how easy it is to throw a form together yourself!

Paper is an easy way to cut cost within a business – and it’s often overlooked. Even when you’re only working with a few employees, it can put a noticeable burden on the company’s wallet, and office space. Imagine looking through that mess for a specific document from years ago.

And none of it is necessary.

Let’s put it into perspective:

– Using paper to send information can cost up to 31 times what it originally costs due to things like printing, copying, postage, storage, etc…

– Cabinets are inefficient and hard to index

In other words, paper is probably hurting a lot more than helping.

How to get rid of the paper

Most papers floating around the business, whether it’s an auto-repair shop or a hospital, are forms. Businesses revolve around recording data and inputting it into a database. Mobile forms work by eliminating the middleman – data entered through your smartphone goes directly to where and who you want.

Is it expensive? Traditionally, smartphone apps take a lot of money to produce. Hiring a coder and programmer can quickly become costly, and can even turn into something you weren’t expecting (in a bad way). What’s more, if you have any changes to make, you have to go back to your developers and draw a new road map.

To combat this, more companies are turning to rapid-development mobile solutions like Snappii to create forms. Snappii simplified the process to just a few steps:

You can also upload your form and Snappii’s app builders will convert your first form into an app at no cost. Try it out!